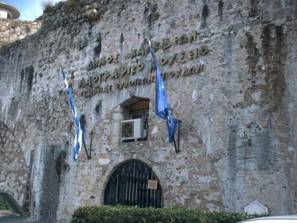 The Laographic museum of Chalkis is roofed since 1982 at the last part of the Enetian castle. This part is what is left from the walls of the city that were demolished because of “embellishment” of the city in the end of the 19th century. Since 1904 when the ruins of all the walls were finished, this part of the castle was used from the army as warehouses. Later in the Greek-German war it was used from the Germans as a prison for those who were later hanged. After the war the building came back to the army’s hands that until 1 9 8 2 was used as a warehouse . Then it was given to the
municipality in order to install the Laographic museum of Chalkis. The building that is saved today in a good condition consists of three rooms while sensation cause its walls that exceed 2 meters deep.